One of the best books I’ve read in the past two years is Robert Putnam’s Our Kids. Putnam deals head-on with the emerging “opportunity gap” in America.  He offers a personal and authoritative look at this new American crisis, beginning with the example of his high school class of 1959 in Port Clinton, Ohio. 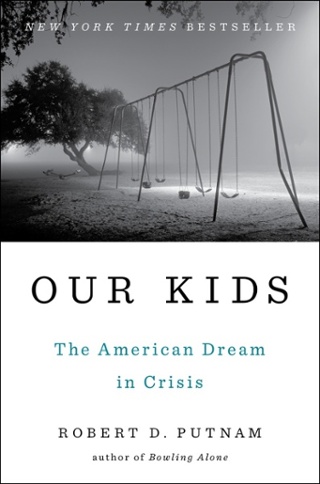 The vast majority of Putnam’s classmates went on to lives better than those of their parents. But their children and grandchildren have faced diminishing prospects. Putnam tells the tale of lessening opportunity through poignant life stories of rich, middle class, and poor kids from cities and suburbs across the country, brilliantly blended with the latest social-science research.

Those of us who work in education realize instinctively that Putnam is on to something.  We know that among poor families today, nearly a third of young people don’t even get a GED. In a recent interview in Washington, DC about his book, Putnam remarked, “Some people think I cherry-picked to get the worst possible cases. That just isn’t true. There are a lot of really terribly-off poor kids in America, of all races, and the most common feature is that they are alone. They can’t trust anybody. Only about 10% of poor kids say you can trust other people.”

At Graduation Alliance, we’re out to change that perception.  We offer Americans of all ages and economic circumstances the resources, support and flexibility they need to improve their lives by providing versatile pathways to high school graduation, job skill certifications, and career credentials.

Whether a student is involved in a Graduation Alliance program for a few days or a few years, our workforce preparation support system is always on — helping participants align their interests and aptitudes, hone their skills, and earn the credentials they need to secure careers in high-demand fields.

Putnam’s book focused on what he’s calling an impending cliff in social mobility in America.  He fears that as children come of age who have less connection to sports, religion, school achievement, or community than at any time since measurements began in the 1960s, they are at a radical disadvantage compared to their peers.

Graduation Alliance helps school districts to train students to rappel that cliff, and to climb to a place where they can align their interests and aptitudes, hone their skills, and earn the credentials they need to secure careers in high-demand fields. From curriculum licenses to wraparound support services, we provide best-fit options for school districts, and the best support possible for students who are at risk of dropping out or never coming back.

In that same DC interview about Our Kids, Putnam said that when he began to research his book he did so as an historian.  He added, however, that the experience of writing Our Kids had turned him into an “activist.”  I suggest that it is time for all of us in education to become activists ourselves, to support students on multiple pathways to success.